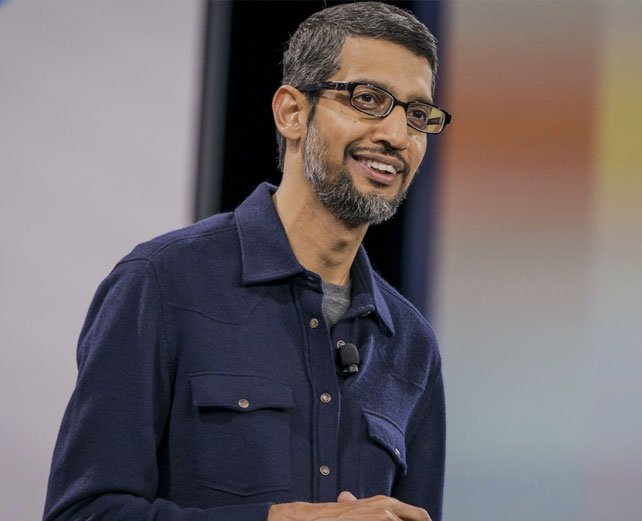 Sundar Pichai was born on 12 July 1972 in Madurai, a middle-class family in Tamil Nadu. His full name is ‘Sundar Rajan Pichai’. His father Raghunath Pichai General Electric Co. In the Senior Electrical Engineer. His mother Lakshmi Pichai used to do the work of Stenographer. But he left the job after the birth of the younger brother of Pichai.

His childhood was spent in Chennai’s Ashok Nagar area. His family of four people used to live there in a small house of two rooms. His father’s income was limited, due to which his standard of living was simple. The comforts of TV, the fridge, the car were not available to them. His father emphasized on the education of his children more than the means of comfort.

When Pichai was 12, his father put the first dialer phone at his house. This was the first thing related to technology, which Pichai had seen at home. After getting a phone call at home, Pichai found a unique talent of himself. Whatever number they dial, they will be printed in their mind. They never forgot that number. Even today, many years old numbers remember them.

Sundar Pichai was a promising student of calm nature. Apart from studies, he was also interested in his sports. He was the captain of his school cricket team. Up to Class X, he studied with ‘Jawahar Vidyalaya’ located in Ashok Nagar, Chennai. After that, 12th standard IIT, from the Vana Vani School in Chennai.

By passing the IIT entrance examination at the age of 17, he got admission in IIT, Kharagpur. There, their branch was ‘Metallurgical & Material Science’. During his engineering (1989-1993) he was always the topper of his batch. In the year 1993, he topped his batch in the final examination and got the silver medal.

Education and initial job in the USA

After taking an engineering degree from IIT, Kharagpur, he went to study at Stanford University, the USA on the Sundar Pichai scholarship. In ‘Material Science & Engg.’ He did ‘Master of Science’. Due to the trend towards MBA, he earned an MBA from Wharton School of Pennsylvania University.

After doing MBA, he did the work of Project Management and Engineering in ‘Applied Material’. Then did the management consultant work in McKinsey & Company.

On April 1, 2004, Sundar Pichai went to give his interview in Google. That same day the company had launched the Testing version of Gmail. The interviewer asked them some questions regarding Gmail Pichai initially could not answer some of those questions properly. They felt that interviewers might have been joking about their April fool. But when they were asked to use Gmail, they could open their thoughts in front of them. Interviewers were so impressed with their views that they were immediately put on the job. His initial responsibility in Google was related to Google Toolbar and Search.

When the Sundar Pichai started working in Google, Google Toolbar and Search Engine used to be the default option in Microsoft Internet Explorer at that time.

One day he thought that Google should make his own web browser, because if one day Microsoft developed its own search engine and set the default option in Internet Explorer, then Google will be permanently deleted from there. When he held his proposal to CEO Eric Schmidt, he refused to approve it by calling it a lonely project. But Pichai remained firm on this and persuaded Google co-producers Larry Page and Sergey Brin to get Google Project approval in 2006.

This is what happened after the 6th of the Google Chrome project was approved, which Pichai was skeptical. On October 18, 2006, Microsoft suddenly removed Google from Internet Explorer and set Bing to its default search engine. Google used to get traffic of millions of traffic per day from Internet Explorer and earning millions of dollars per day. This was a great blow to Google.

But Pachai had already taken this situation to his senses. So in 24 hours with his team, he pulled out the Internet Explorer’s loop-hole search Because of this, the option of setting up your default search engine to Google once again appeared in a pop-up window in front of people who had moved on Bing. In this way, they retained 60 percent of Google users. After this shock by Microsoft, Google took a strategic move and signed it to HP and all the major computer distributors that they would default on Google Toolbar and its search option on their PC.

The foresight of Sundar Pichai’s saved Google from a major loss. Given their style and talent, they were promoted to the rank of Senior Vice President at Google. Pichai played an important role in the Google Chrome project When Google Chrome launched in 2008, it was Google’s greatest success until that time. Today Google Chrome is the most used web browser in the world.

Given their qualification, they were made a total head of all Google products in 2014. Which includes products like Google Search, Google Map, google plus, Google Commerce and GoogleAd.

A lot of credit for Google’s success goes to new innovations going on in Google and the leader who is working on these innovations is – Sundar Pichai.

Given their achievements, Google announced the company’s CEO on August 10, 2015. Simultaneously, Sundar Pichai has joined the people of Indian origin, who is a top official of the 400 billion dollar company. Today the annual income of Google CEO Sundar Pichai is $650,000.

A company like Google, where to get a job, is a big deal. It is a matter of pride for all Indians to reach the highest place of an Indian origin in that company.

Google: ‘We do updates all the time’ — somewhat confirming February update rumors

Now get your Google Shopping ads on Gmail, Discover, and YouTube